The flaw in football

It has been suggested that a significant reason why football is such a popular sport, both in the UK and worldwide, is to do with the fact that it is a very low-scoring sport.  0-0 draws are common.  Anything more than about 4 or 5 goals in a 90-minute match is unusual.  The result of this is that every goal matters very much. A single goal usually changes the feel of the whole match.  Therefore goals give players, spectators or fans very big emotional highs and lows during a match.  In short, football is popular because it is exciting.
This is a good thing, though has the disadvantage that scoreless (and often relatively boring) games are common.  However, I see a more significant problem. 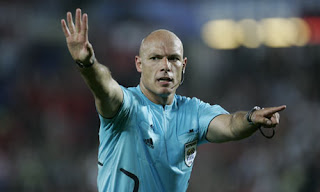 Although football brings the big highs and lows when goals are scored, the fact that it is such a low scoring game (and therefore most goals are very important) means that any mistakes made by officials are more significant than in other sports.  An incorrect penalty or offside decision, or a goal wrongly allowed or disallowed, have a very large impact on the outcome of a match and, in a sport where winning the title, getting into Europe or playoffs, or being relegated often come down to a single point, a single refereeing mistake in a single match is enough to change the fortunes of a team for the entire season.  People say that such things even themselves out over the course of a season.  They do not.  Most leagues have a maximum of about 46 games.  To be relatively sure that such mistakes were evened out, more like 460 games would be needed.

This is not the time to rant about refereeing mistakes, but it should be noted that such mistakes probably have a larger effect on a football match than a match in another sport.  Hence, there is arguably more pressure on football referees and linesmen than on officials in other sports.  Add this that football seems a particularly difficult game to officiate, due to vague rules that are very open to interpretation, and football referees need all the help they can get.

Such help is of two forms.  Firstly, and famously, 'technology' i.e. TV replays, Hawkeye etc.  Football must be the only major sport left not using such things.  If a referee is unsure of a decision such as a penalty appeal or an offside, he or she should be able to check a TV replay.  Arguments that this would slow down the pace of the game are flawed, because the pace is already slowed down by all the arguments and protests that result from decisions that players disagree with. 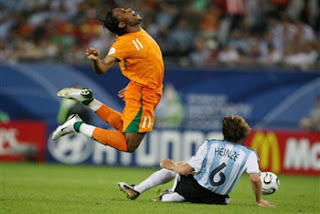 Secondly, help is required from players, managers and fans.  Players should stop cheating.  Every game I see includes incidents of players going down too easily, cynically fouling each other, etc.  Managers should be honest.  If a manager knows his team have been given a soft penalty, or got away with an offside goal, or whatever, they should have enough integrity to admit their good fortune, rather than denying it or claiming they 'didn't see the incident'.  Without this honesty, complaints about referees mistakes cannot be taken seriously.  Fans have a part to play too.  We, like managers, should acknowledge our good fortune with decisions.  We should campaign for both the use of technology in the sport and for honesty and fairness from players and managers  .And no matter what we think of referees decisions, there is no excuse for the mob mentality of abuse that is directed at referees during games.

I've been thinking more and more recently that football, while entertaining, exciting and popular, is actually not a particularly good sport.  But I think these alterations would significantly improve it.  When I am king of the world, I'll make some changes.
Posted by Unknown at 11:55

Anyone for a game of frisbee?
But no doubt if Ultimate Frisbee went pro there would need to be refs because the greed factor would kick in. Tricky to manage human nature in sport, isn't it?

Ben, while agreeing with your thoughts on refereeing, you drop a bombshell without explanation at the end of the article - "football[...]is actually not a particularly good sport." What do you mean by this? Are you implying that the extent to which its outcome is determined by adjudication is so great as to undermine the sport itself? Or is this a more holistic conclusion?

Joe - am I "implying that the extent to which its outcome is determined by adjudication is so great as to undermine the sport itself" - yes, at least in part. It's an incomplete train of thought at the moment.