The Middle-Earth Eagle Postal Service...or not

This is a question which I’ve been asked many times, and have got bored of explaining.  It came up again a few days ago so I thought I’d write about it, so that next time someone asks, I can say the wonderful line ‘I refer you to my blog’.

The question is: “In The Lord of the Rings, why didn’t the eagles fly the ring to Mordor?”

The answers are multiple.

Firstly, as Gwaihir (King of the Eagles) himself says in Fellowship part 2 chapter 2 (The Council Of Elrond), the eagles were “sent to bear tidings not burdens”.  The eagles had been ‘devised’ by Manwe, one of the Valar (a former race living in the world of middle earth), in the First Age (LOTR taking place at the end of the Third Age).  They were spies and messengers, not transportation.
Although Gwaihir carried Gandalf a few times, that was on the level of a personal favour, and only over short distances. 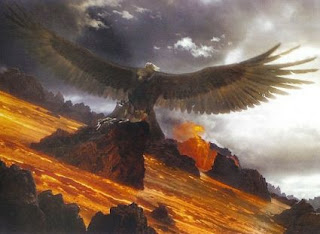 On a more practical note, the whole point of taking the ring on foot was to keep the mission as secret as possible.  Had Gandalf, or anyone, attempted to take the ring on an Eagle, it would have been seen easily by Sauron and/or the Nazgul, and would have been taken out with arrows or fell beasts.

Some people have suggested that the eagles would have succumbed to the temptation of the ring and not delivered it to Mount Doom – possibly true, but as far as I can tell, we are not told enough about the eagles to know if this is correct or not.

Having said all that, it is probably significant that Tolkien doesn’t discuss the eagle possibility at any point.  Various other plans are suggested and dismissed, all with good reason.  The eagle plan is not mentioned at all.  This suggests that Tolkien probably didn’t think of it.  Yes, even Father Tolkien forgot something.  Fantasy is a very hard genre to write.

But even given this, the above reasons hopefully explain that, even if Tolkien had thought of the idea, he would easily have been able to write a logical argument as to why it would clearly not have been an option for the Fellowship.
Posted by Unknown at 19:32

Email ThisBlogThis!Share to TwitterShare to FacebookShare to Pinterest
Labels: Eagles, Lord of the Rings, Tolkien