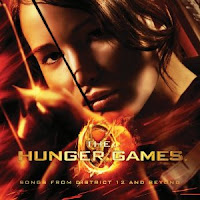 This is something I haven't done before.  I plan to write a series of 5 posts on The Hunger Games.  One now, having seen the film once.  One after seeing it for a second time.  And one after reading each of the three books.  We'll see what happens.

I really liked the film.  It has gone straight to the top of my 'Films of the year' list.  I loved the concept and thought it was really well done.  I was absorbed.  The film fed my excitement for new young actors.  It's the second thing I've seen Josh Hutcherson in and, while he wasn't as mindblowing as he is in Bridge to Terabithia, he was still good.  I didn't get to see Jennifer Lawrence in Winter's Bone, but this alone has convinced me that she's good.
I was left a bit disappointed by the length of the film - I thought it could have been longer.  Yes, I know it is already 140 minutes, but since when have I been bothered by long films?  I wanted more backstory about District 12 and Katniss' home and family life.  And I wanted more detail on the buildup to the Games and how all the sponsorship worked.  But in spite of this, I enjoyed the film and immediately ordered the books when I got home.

Possibly the most significant indication of how much I liked the film is that I want to see it again.  This only happens with films I really like.
Posted by Unknown at 21:44

Email ThisBlogThis!Share to TwitterShare to FacebookShare to Pinterest
Labels: Films, The Hunger Games

Memoirs of a failing procrastinator said...

For what its worth ben, and I will add my own blog at some point when I get round to it, I agree. The film, whilst at some points the dialogue was slow and some of the action/fight scenes a bit too rapid for full enjoyment, notwithstanding this I think it is an excellent film based on the following: concept, dramatisation (although I have not read the books, but intend to); action and overall I would give it 7/10 which for me is a high rating. I'd say all in that its an excellent film, and I'll write more in due course.

Memoirs of a failing procrastinator said...

Oh, and the above was from me, Ed.

I'm not sure the books devote that much time to district 12 or the sponsorship of the games.
Also, It's designed for a younger audience and therefore will be shorter to cater for the expected shorter attention span etc.
Respectfully, Dan

Not seen the film yet but the book is satisfying and yet doesn't extensively back story the characters. Kate and I have the books if you need.

Thanks Tim, but I ordered them when I got home!