It's nice having the Easter holidays to do geeky things.  Yesterday, Chris Morgan and I decided to independently rank all songs by Delirious on their main 7 studio albums, and then compare our opinions.  To clarify, we were ranking songs from King of Fools, Mezzamorphis, Glo, Audio Lessonover, World Service, Mission Bell and Kingdom of Comfort.  We included songs from both UK and US versions of Audio Lessonover.  This gave us a total of 88 songs.
Here are our lists.

As you can see, we agree on the top 2 and bottom 2, and coincidentally placed some other songs together.  Our biggest disagreements were with Alien, The Years go By, Inside Outside and Grace like a River.

I decided to give each song points based on position, so My Glorious scored 88 and Stealing Time scored 1.  I then averaged the scores for each album and produced the following graph.  The letters at the bottom represent the seven albums but they are small.  The order, from left to right, is King of Fools, Mezzamorphis, Glo, Audio Lessonover, World Service, Mission Bell, Kingdom of Comfort. 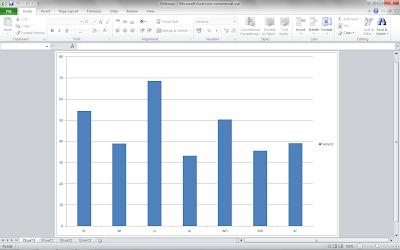 As expected, Glo is the clear leader, with 9 of its 11 songs appearing in the top 27.  Surprisingly, King of Fools outscored World Service - the lower and middle sections of each album scored similarly, but the best songs on King of Fools outscores the best of World Service.  Kingdom of Comfort and Mezzamorphis were neck and neck, while Mission Bell suffered from having no songs in the top 25.  The pre-race outsider, Audio Lessonover, predictably came last, though Alien did manage a top-10 place.

As a final disclaimer, it should be noted that the above album ranking based based on scores for isolated songs, which is not a particularly valid way of ranking albums!
Posted by Unknown at 16:18

Just re-read this after several years. Still disagree with you.

Just re-read this after several years. Still disagree with you.