This is the final part of my 5 part series on The Hunger Games.  Parts one, two, three and four are here.

I've now read the final book in the series, Mockingjay.  I haven't quite had time to process all my thoughts yet, but here's a sample. 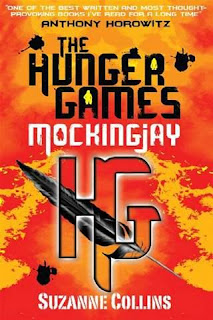 The book was as readable and exciting as the previous two and finished the series well.  The plot was good, though a little off-page.  A lot of stuff happened off-page and was simply reported to Katniss by other characters or the narrator.  This was necessary to prevent the book becoming overlong, and a necessary problem caused by writing in first person (more on this below), but it disappointed me a bit.
Gale came into the story a bit more, though I still feel like I don't really know him.  His character wasn't developed much.  Katniss' character is still engaging - a complex mix of inspiring and annoying.  Very flawed and very interesting.
I was interested to hear a few weeks ago that Mockingjay will be split into two films, following in the footsteps of Harry Potter and the Deathly Hallows and Breaking Dawn (Twilight Saga).  At first I was suspicious of whether there would be enough content to fill two films.  I now think there is - the plot is dense and there is a lot of action which always takes more time on film.  The decision is probably still motivated primarily by money rather than a desire to adapt the books well, but at least the book is adaptable to two books and should make two decent films.
The fact that the series is written in first person caused a few problems.  I've read very little first person fiction so haven't come across this before.  The problem is that (obviously in hindsight) the reader only knows what the main character (Katniss in this case) knows.  There were a few times in the book where lots of things were explained to Katniss, it seems for the benefit of the reader.  When Katniss had been absent or unconscious, lots of exposition followed which seemed like a bit of a limited way of doing things.  I've never been much of a fan of first person fiction, and this series has confirmed my wariness.
However, overall, I enjoyed the series.  The story is good, though at times is seemed like the author didn't know exactly where she was going - it felt a bit lost and meandering.  While Katniss endless fretting her choice between Peeta and Gale became a bit tiresome, her character, as previously discussed, is brilliant.
The Hunger Games is certainly no Harry Potter, but it's also certainly no Twilight.  Easy to read, gripping plot, interesting characters and themes and some really touching moments.
Posted by Unknown at 11:18

Email ThisBlogThis!Share to TwitterShare to FacebookShare to Pinterest
Labels: The Hunger Games