There were a few controversial moments during the Olympics, but two particularly got me thinking. 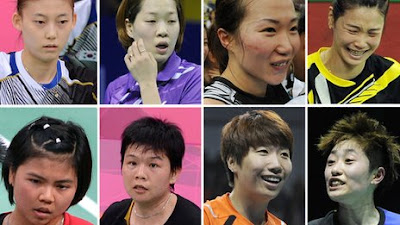 The first occurred in badminton.  The first round of the badminton competition was a round-robin group stage.  In the women’s doubles, in one group, the favourites unexpectedly lost one of their matches, meaning they finished second in the group.  This meant that teams in other groups would rather qualify second in their group rather than first, as second would see them avoid the favourites in the quarter finals.  Therefore four pairs of players attempted to lose their final group matches and thereby finish second in their group, not first.  The crowd booed the players, who were later disqualified from the competition for ‘not using one’s best efforts to win’.
I have two conflicting reactions to this.  The major reaction is that I agree with the disqualification.  In sport, one should always do ones best, and attempt to win.  Simple.  And this is how the vast majority of people seem to have reacted.
Some people have defended the players, pointing out that they didn’t actually break any rules.  Technically, they didn’t do anything they weren’t supposed to.  A fair point, but not the one I wish to make.
I want to point out that in many sports, competitors or teams perform at less than their best in the short term, for the sake of long term goals.  For example:


There are other examples but the point is minimising performance in the short term in order to maximise performance in the long term.  After all, it doesn’t matter if you lose a certain match, or set, or frame, if you eventually qualify and win in the final.  The ultimate goal is to win in the final, and before that, you just have to do enough to get there.
This is what the badminton players were doing.  They had already qualified from their group.  They were minimising short term performance to maximise their chances of winning the competition in the long run.  The key difference is that in the other examples, players or teams are not actually trying to lose, they are trying to win with minimum effort.  However, this difference only stands if you break a competition down into matches.  The tennis player and snooker player want to win their matches, they just want to do it as easily as possible.  They would never go so far as to lose a match.  But breaking a competition down into matches is only one way to do it.  We could break a tennis tournament down into individual points and not be surprised or alarmed if a player gave up on the odd point in order to conserve energy.  What got people so angry is that the badminton players were trying to lose a match, but that is a fairly arbitrary way of dividing a competition.
You can either say that a competitor should try their best at all times, or you can say that a competitor should do what they need to win the competition, saving themselves where necessary.  Saying “they should try to win every match, but within matches can play at less than their best at times” is no different from saying “they should try to win every tournament, but within tournaments can play at less than their best at times”.
The difference between what the badminton players did and what commonly happens in sport all the time does not equate to the far larger difference between peoples outrage at the badminton players and people’s not-batting-an-eyelid at what commonly happens in sport all the time.
Another problem that people had with the players’ attitude is that people had paid money to come and watch entertaining sport, not a ‘farce’ of this nature.  But we have to remember that this is the Olympics.  It’s the biggest sporting competition in the world.  Not the biggest performance in the world.  These players are here primarily to win, not to entertain.  (More on this in a later post)
I do think that the players should have been disqualified, but part of my brain keeps pointing out that what they did is not very different from what happens in many other sports, and the reasoning behind the outrage is based on an arbitrary assumption that matches should be played to win, while individual points or sets should not necessarily. 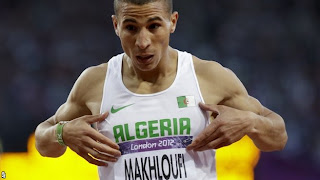 The second moment of controversy occurred in the men’s 800m.  Taoufik Makhloufi of Algeria had been entered into both the 800m and 1500m.  He ran the 1500m heats and qualified for the final.  The scheduling was ludicrous enough that the 800m semifinals were in the same session as the 1500m final, removing any chance of anyone actually attempting this common double.  Makhloufi, having qualified for the 1500m final decided not to enter the 800m – a sensible decision given the scheduling clash.  One assumes that he had originally entered the 800m to give himself a backup if he failed to make the 1500m final.  It is quite common for an athlete to enter an event before the meet and then pull out.  Jessica Ennis did it in the 100m hurdles.  However, the Algerian Olympic Association failed to withdraw Makhloufi from the 800m, meaning he had to compete in the heats.
Makhloufi decided to not try in his heat.  He ran only 200m and then dropped out, thereby not qualifying and leaving only the 1500m to concentrate on.
Makhloufi was later disqualified for ‘not providing a bona fide effort’ – disqualified from the 800m and the 1500m.  There are clear parallels with the badminton players here – minimising performance at one stage of the competition to maximise performance in a later stage.
Makhloufi appealed and was reinstated into the 1500m due to medical evidence (presumably stating that he was injured for his 800m heat).  The next day he won the 1500m, clearly at full fitness.
The controversy here is multiple.  Firstly, should he have been disqualified from the 800m, when the scheduling made it clear that no-one would be able to pursue both events to the final?    Secondly, should he also have been disqualified from the 1500m, an event in which he had competed to normal standard?  Thirdly, should the scheduling not have been more intelligent, as the 800m/1500m is a very common double to attempt in athletics?  Fourthly, should Makhloufi have been reinstated on the basis of a clearly false injury claim?
Given my comments on the similar situation in the badminton, I think there is a strong case for saying that he should not have been disqualified.  The case here is even stronger than for the badminton players because (a) it wasn’t his fault he wasn’t withdrawn – it was the fault of the Algerian Olympic Association, and (b) it wasn’t possible to run in both events, so he had really been screwed over by the Olympic organisers in the first place.
Posted by Unknown at 10:31

This was Ben Johnson, by the way. Apparently, I'm 'Unknown.'