Towards the end of the Olympics, Ben Dirs wrote this on the BBC website.
On the face of it, the article is about why only some sports are in the Olympics, but it's really about what makes a sport a sport.  The example of synchronised swimming was used, but references were also made to dressage and rhythmic gymnastics.  The following key point was made:
"I respect the participants of synchronised swimming and their indefatigability I salute. The French duet was throwing shapes to Tchaikovsky's Swan Lake, and that presumably takes some doing, especially when you're upside down, shin-deep in chlorinated water and trying to keep up with your mate next door.
But at what point does performance become sport? People have been dancing to Swan Lake for almost 150 years - they call it ballet. By extension, if you put a set of judges down in the orchestra pit at the Bolshoi, then ballet becomes sport." 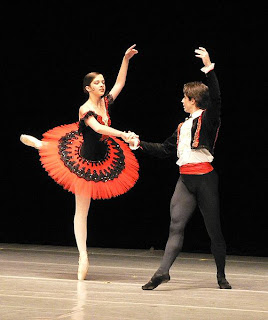 A fair point.  Synchronised swimming is very similar to ballet, just in water.  Dressage and rhythmic gymnastics (and I would add diving and possibly artistic gymnastics and trampolining) are similar.  All these are scored by a panel of judges who make - and this is the crux  - qualitative decisions, which they then give quantitative scores.  A sport like hockey or handball is measured quantitatively, by counting goals.  These other sports are measured in a more qualitative way.  Judges look for how well competitors perform certain moves.  They look for something like straight legs, but judge it qualitatively rather than actually measuring the angle of bend at the knee.  Does this mean they are not sports?  Not necessarily.  But I think it does mean that if they are, then something like ballet could legitimately be considered a sport.  And if ballet, then surely other forms of dance could be judged in a similar way and be called sports.  Of course, dancing competitions do happen...but they are not considered sporting competitions.  Similarly, playing a musical instrument can be judged, even in a competitive way, but is not considered a sport.
But looking at it another way, what about chess?  Quantitatively measured, but a game, not a sport.  Why?  Because of the lack of physical exertion?  Well what about darts?  Darts is considered a sport but involves very little physical exertion.  While ballet is the opposite - not a sport, but physically very demanding. 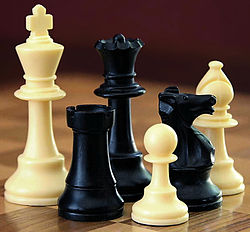 If you include synchronised swimming, diving and gymnastics as sports, you have to be willing to include ballet and trombone playing.  If you include darts, you have to include chess.
A brief look at Wikipedia and the IOC website reveals that sport is generally recognised as activities which are based in physical athleticism or physical dexterity.  In therms of the Olympics, to be a potential Olympic sport, an activity must have an international federation and be practised around the world.  Interestingly, they IOC recognises five 'mind sports' - bridge, chess, draughts, go and xiangqi.
This is clearly a minefield of inconsistency.  It seems that the definition of a sport should either be much narrower or much wider than it currently is, but I don't know which!
Posted by Unknown at 22:18