This is a review of Bluetree's second album, Kingdom.  I reviewed their first album here, nearly 4 years ago. I heaped praise on it and expected great things (pun intended) of this band.  It has been quite a wait for the second album.
Briefly, song by song...
1.  Glorious Victorious.  A strong opener.  Upbeat and rocky, a good tune.  Lyrics range from strong but unoriginal to a bit lazy really.
2.  You Were You Are.  A bit weaker.  Similar in style to track one.  Again, unoriginal in lyrics and with one particularly poor line, but a very strong tune.  Easy to listen to. 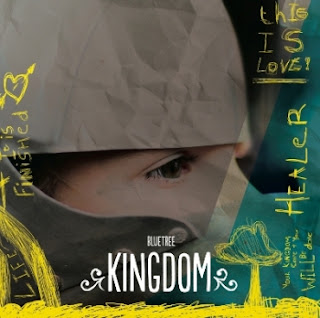 3.  It Is Finished.  The 97 second intro takes over a minute to get going.  Reasonable lyrics but again, nothing new or original.  Music is ok but a bit...nothingy.
4.  Exalt Him.  More interesting music, though still in a very similar style to the first two tracks.  Lyrically, still fairly standard stuff.  Not bad, just not that interesting.
5.  Destined to Reign.  More interesting themes, but a bit mixed up.  Lots of Christian-sounding words, but not saying that much for most of the song.  Musically more interesting, but a bit of an annoying riff.
6.  Jesus Healer.  Some of the strongest lyrics on the album.  Not outstanding, but better than most of the rest.  Music is pretty strong too.  Catchy.
7.  Shine.  Features Martin Smith, and you can tell.  Sounds Deliriousy, but takes a long time (over 3 minutes) to really get going.  More unique lyrics than most of the other songs.
8.  You Are My Rock.  Even the title sounds cliched.  Again, takes a while to get going, and isn't particularly interesting for the whole six minutes plus.  Doesn't do anything wrong, just doesn't do much right.
9.  Rest.  Almost a carbon copy of track eight.  Not sure which is better.  Similar themes, similar lengths, similar structures, similar songs.
10.  Lightens Up.  Ooh, hello electronica.  This is new, this is interesting, this is exciting.  This song is fresher and more original, both musically and lyrically.  Possibly my favourite on the album.
11.  Under My Feet.  They tried a dance track.  It didn't really work.  The weakest track on the album.

Overall thoughts?  Musically, the album is decent.  Easy to listen to, catchy, memorable.  Lyrically, cliched is the best word.  Not all the time, but a lot of the time.  Compared to Greater Things, this is where Kingdom really lets itself down.  There is nothing on the level of Life's Noise, Burn Me Up or God Of This City.  Nothing is even close.  This is not a bad album.  It's not even necessarily much worse than Greater Things, which did have its weak points.
Could they still be the new Delirious?  Yet, but they'll need to produce the third album more quickly than the second, and it will need to be fresher, more unique, more interesting.  Kingdom isn't bad, it's just very normal.

My feeling was that it was trying to be the first album, just not doing it as well. They put out a live album last year which was pretty disappointing.