So, the saga is complete.  The Dark Knight, having fallen, has risen.  I've seen it twice now and, for various reasons (the main one being the Olympics), I probably wont't see it again at the cinema.  So it's time for some sort of verdict.

Firstly, the film on its own.  It's very good.  The acting is excellent.  The plot, and twist, are great.  The action is impressive.  The length is not excessive (anything but).  My main emotion is satisfaction.  I am not disappointed.  But, this films suffers in the way that, as far as I can tell, a few of Nolan's films suffer.  Although he's a great storyteller, his films don't always make sense.  I sometime think that Nolan tries to be too clever, and, given time constraints, doesn't always explain the stories well enough.  Inception is the classic example of this problem.  If you really think about Inception (and I have), even though it's brilliant and everything, it doesn't actually make sense.  This is either because it just doesn't make sense and Nolan isn't as brilliant as everyone thinks, or it makes sense in his head but doesn't make it onto the screen, either because Nolan doesn't notice the gaps, or because he's restricted by time/budget/film length/whatever.  It's not quite as bad here, but there are three quite important things in The Dark Knight Rises that don't quite make sense to me. 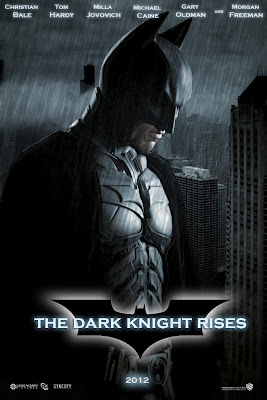 One: how do Blake and Bane know that Bruce Wayne is Batman?  According to Blake, he 'just knows'.  Bane...there's no explanation.  No-one has managed to work it out in a decade, and suddenly these two just know.  I don't buy it.
Two: why does Selina Kyle betray Batman to Bane?  She says something like "I had to do something to stop them wanting to kill me" - but why would Bane want to kill her?  Until now, the two have had no dealings together.  One website suggested that, because Bane and Daggett were working together, and Daggett tried to have Kyle killed, Bane would want Kyle dead.  I don't think so.  I can't see Bane really caring about the fate of the girl who supplied Bruce Wayne's fingerprints.  Even if he did, it is quite plausible that Bane would take Batman and then kill Kyle anyway.  The whole betrayal by Kyle didn't ring true for me.
Three: why does Kyle go back to rescue Batman and Jim Gordon?  Up until she does, her main appearances have been stealing the necklace, dancing with Wayne, and fighting with Batman on the rooftop. Then Batman goes to the prison and comes back, and gives her the Clean Slate program.  She takes him to Bane and then...sticks around.  Instead of legging it, as has been her aim for the last 90 minutes of screentime and 5 months of lifetime, she stays to help.  At this point, she even makes it clear that she doesn't think Batman's plan will work and she asks him to leave with her, saying "You don't owe these people any more, you've given them everything".  Batman stays to try to destroy the bomb, and she stays too.  She goes from essentially selfish, aiming to get away and start a new life, to selfless, staying with Batman even though she believes his cause to be hopeless.  No reason is given until the end where she and Wayne are seen in Florence together (more on this later).  If they are meant to have fallen in love, I am not at all convinced.  She and Wayne have a minute fraction of what Rachel and Wayne had.

These issues do not mean I disliked the film or thought it was a bad film.  But from a director and writer of the quality of Nolan, I am disappointed that there are so many problems in a story that, to be honest was far, far simpler than that of Inception.  These issues would all be explainable, but the time is not taken to explain them.

Now, the film as part of the trilogy.  To start with, I do not think that The Dark Knight is significantly stronger than Batman Begins.  Yes, it is stronger, but not by much.  I think The Dark Knight Rises is on a par with them both.  It is not a disappointing end to the trilogy.  They are very strong films, across the board.  I like how the themes continue throughout the trilogy and some are particularly highlighted.  Symbolism, obviously, with the concept of Batman being greater because he can be anyone (note: not the same as anyone can be him!).  I loved how this theme climaxed with the flaming bat symbol on the bridge, and the effect Batman's presence had on the Gotham police. 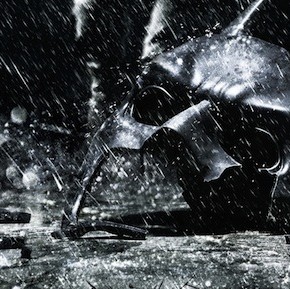 Another thing I was excited to see was the return of the rise/fall conversation.  This began in Batman Begins: "Why do we fall? So we can learn to pick ourselves up."  This idea keeps raising its head.  At the end of The Dark Knight, Batman has both appeared to have fallen, by apparently killing Harvey Dent and other members of the public, and actually fallen, by descending almost to the Joker's depths in his ruthlessness.  Although I think 'The Dark Knight Rises' is an awful name for the final part of the trilogy, the idea of him rising from this fall and fulfilling what could be seen a s prophecy from Batman Begins (Why do we fall...etc), is exciting.  And, of course, he does rise.  He reappears as Batman and inspires the resistance against Bane.  And he meets the perfect end, sacrificing his life to save the city he cares so much for.  Perfect redemption.  Finally the hero, after eight years of being wrongly labelled the villain.  The perfect sacrifice, the perfect Rise. Except...that's not how it ends.  When I saw that Bruce Wayne had survived and ended up in Florence, I felt both gutted and cheated.  I really did.  Batman's final heroic act was perfect, and I really, honestly thought that Nolan had the guts to finish with bittersweetness.  Bittersweet endings happen so rarely in films, but Nolan has always been a director who respects his audience and is not afraid of throwing tough stuff at them.  I thought that if there was any director who would finish such a huge and successful series in such a shocking and poignant way, is was Chris Nolan.  I was wrong.  This is my biggest complaint with The Dark Knight Rises.  In fact, with the whole trilogy.  I can accept plot holes and other things I don't understand.  No film is perfect.  But the ending left me feeling cheated.  I was in tears at the funeral.  Then, a few seconds later, my tears seemed fake.

What else?  The revelation of Blake as Robin?  Yes, I'm happy with that.  I'm not a die hard Batman fan (not even close), and purists may rage about it, but I thought it made sense.  Obviously it changes Robin from Batman's sidekick to his successor, but within the story Nolan has told, it works.  Blake's character was set up for this from the start of the film.  Will they make a sequel?  I don't know.  I don't think Nolan will.  But someone else may get together with Gordon-Levitt and make a Robin film.  I might see it, I might not.

Overall, Nolan's trilogy is excellent.  It might sound like I'm complaining a lot, but I often find that, at least for me, the more I like something and the more I care about it, the more complaints I have about it. The idealist in me sees what it could have been, and picks up on all the things that fell short.  If you think I have a lot of complaints about this film, you should hear me on The Lord of the Rings.  Talking of which...although Nolan is superb, Jackson is still king.  One stat I saw today - Nolan made The Dark Knight Rises (just the third film, two and three-quarter hours long) on a budget of $250 million.  Jackson made The Lord of the Rings (all twelve hours of it) on $281 million, just $31 million more.  Jackson is still king.  Bring on December 14th.
Posted by Unknown at 13:05

I feel exactly the same about the ending.

Hmm, we need to have a conversation about this movie... you're clearly in need of some enlightenment on Selina Kyle ;-)