I've now read the second book in the trilogy, Catching Fire.  I liked it.  Just like the first story, this middle part is easy to read, entertaining and gripping.  Plenty of cliffhangers and bombshells dropped in to keep me reading.  It probably helped that I'm on holiday so I had time to read it fairly quickly.

Some things I particularly liked: 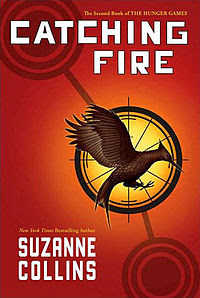 
I think these are the first books I've read having already seen the film.  I've noticed how much my imagination is influenced by the film.  When I read about Katniss and Peeta, I see Jennifer Lawrence and Josh Hutcherson.  I guess this isn't surprising, but I think it's the first time I've experienced it.

One final thing.  I'm really enjoying reading a series that (a) has a female lead, and (b) isn't Twilight.
Posted by Unknown at 11:56

Email ThisBlogThis!Share to TwitterShare to FacebookShare to Pinterest
Labels: The Hunger Games