This blog is rambling and may be incoherent. I am sorry for this, my head is addled at the moment. I hope that at least some of it makes sense.

Why are some people considered more attractive or beautiful than others?

Different people find different people attractive. There is no-one who is considered universally attractive. Even the looks of Keira Knightley, recently voted at number 10 in FHM’s 100 sexiest women poll, disgust a good friend of mine. And she’s (apparently) in the top 10 most attractive women in the world!
This suggests to me that the idea of the eye of the beholder is correct. A person’s beauty isn’t their own quality, but is defined by the observer. Therefore some people will find person A attractive and some people will find person B attractive. Another friend of mine has a theory that this is true for most people but that there are about 5% of people at either end who are either universally attractive or universally unattractive, with the 90% in the middle being ‘eye of the beholder attractive’. An interesting theory, and one that I gave some thought to, but I don’t think I agree with. I don’t believe in the 5 % on either end.

I do not think that beauty (or attractiveness or whatever) is something that can be measured, so it cannot be said that one person is more or less attractive than another. However, I do think that there are people who are considered attractive by the majority of observers. These may be the ones who feature in FHM polls and the like – they are not necessarily any more attractive than other people, but a larger proportion of observers consider them attractive. The key scale is not a scale of inherent beauty, but a percentage of observers who see beauty.

Having said that, there clearly is a scale of attractiveness, because observers do not categorise people into ‘attractive’ and ‘unnattractive’. I might find person A more attractive than person B (that’s the eye of the beholder effect), and the general population, as a percentage, may either agree or disagree.

This can be shown as a graph: 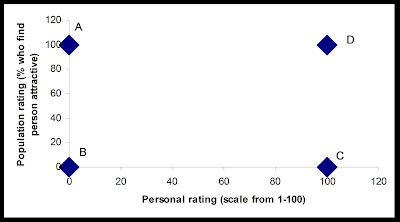 But it’s more complicated than that because, of course, the ‘population’ is made up of individuals, each of whom has their own eye-of-the-beholder preferences. So it seems that the eyes of many beholders are pleased by Keira Knightley. So is that really because she actually does have more inherent beauty than most people, but a minority of observers don’t see it? Well, is beauty a matter of opinion? If it is, then Keira cannot be inherently any more beautiful than Miss Average, it’s just that many people find her attractive (could this be culturally conditioned?). If beauty is not a matter of opinion, then, according to FHM, Keira really is more beautiful than most people.

The possibles situations:
1. Beauty is a matter of fact, that could potentially be measured. Some people are just more beautiful than others. Some (clearly misguided) individuals may disagree, but these people are the ones who tend to top FHM polls.
2. Beauty is a matter of opinion, found in the eye of the beholder. FHM polls only occur because a majority of beholders find people like Keira attractive (though we have yet to fully explore why this might be).
3. Some people (about 5% on either end) are inherently attractive or unattractive, and the other 90% are beautiful to the eyes of some beholders.

I am firmly set on option 2, though at this point I can’t quite explain why. As for why so many people consider one person attractive, as hinted above, I think our culture and the media play a big role. We are obviously fed images and ideals of what beauty is or should be (the Knightley look), but this is different to other times in history when a different look would have been considered beautiful. If the culture changed so that another look was defined as beautiful, I expect that Keira would no longer be in the FHM top 10.

That’s about all I have to say at the moment, but if I think of anything more I’ll add it in.

The moral of the story – I am beautiful. If you can’t see it, you must be blind.
Posted by Unknown at 22:25

I can't believe you drew/made (whatevs) a graph.