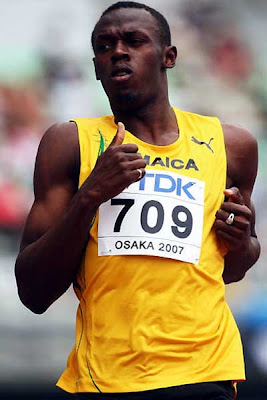 Well done to Usain Bolt. Massive congratulations. Two Olympic Golds with two world records is unprecedented, and he looks able to go faster. And he’s only 21.

Well, based on that theory, England striker Peter Crouch, at 6 foot 7, should be even faster, but in fact Crouch is slower than a lame, 3-legged, 90-year-old sloth.

Whenever I walk or run fast, people tend to complain that they can’t keep up because they have shorter legs. Tired of explaining their error, I’m writing my explanation down, so I can simply say ‘I refer you to my blog’.

Running speed is based on two things: stride length (the length of each stride, duh) and stride rate (the rate of strides, e.g. 100 per minute). To run faster, you can either take longer strides, or take them more quickly.

PhD studies show that up to speeds of about 6 metres per second, both these factors play a part in running speed, but above 6 metres per second, the factor that increases speed is in fact stride rate, not stride length. So if you want to run faster, take quicker strides. My long legs are of no help to me above 6m/s. 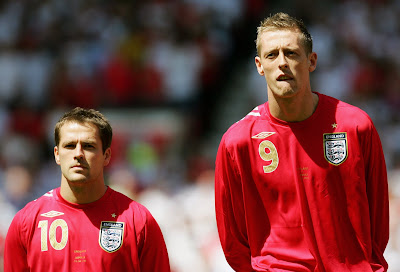 If you are already bored of the science and maths, think back to Peter Crouch – why is he so much slower than England compatriot Michael Owen? Because Owen moves his legs faster, even though he has little legs.

On top of this, it is possible to overstride, which means taking strides that are too long for your body to cope with. This slows you down. There is an optimal stride length for each person. Mine is probably longer than yours, but that means that each of my strides takes more energy, because I move my leg further. Each of your strides takes less energy, but you can take more of them.

There is an argument that taking more strides is more tiring because of the energy needed to lift the feet against gravity. Probably true, but I suspect insignificant. If it was significant, Crouch would be faster than Owen, and you’d be Olympic champion.
Posted by Unknown at 21:48