Think of Connect 4, the game. 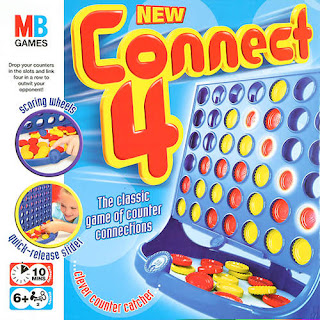 Now imagine playing it at speed, where you can play pieces as fast as you like without having to let the loser on the other side have a go. First to four wins. It's about speed, alertness and downright aggression.

Now imagine it as a doubles game. Two players on each side. Each player may use one hand only (the other hand must hold the base of the frame to stop it being knocked over). Each player may only have one piece in his or her hand at a time. You may not move your hand past the centre of the frame.

Four hands fly to the same column at the same time. Or maybe three fight it out while the fourth sneakily slips two quick ones down the far side. Do you work on a single line of four or try to control as many columns as possible? How do you watch four players at once - is it best to concentrate on your own game? Do you block the other team as soon as possible or let them waste time putting three in before stopping them, but run the risk that they make the fourth before you get there? It has the tactics of chess, the adrenaline of boxing, the beauty of ice dancing, the thrill of poker, the luck factor of chase the ace and the sheer madness of extreme ironing.

The fastest game ever lasted under three seconds. The longest was over twenty, which when playing doubles speed connect 4 is a very long time.

Wow this is brilliant, I would say I would play it when I get to Hebron... but I'm not going this year :-(, Ah well will have to find a set for Springy :-)