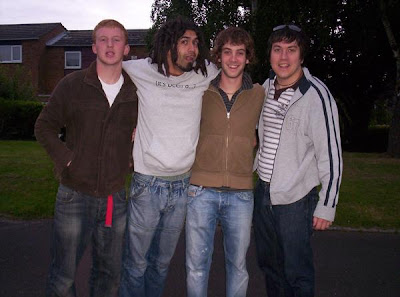 Strangeday have the privilege of being the subject of my first post here.
Strangeday are a band that I first saw in the summer of 2004 (I think) at a Chrsitian music festival in Milton Keynes called H3. Steve were headlining the weekend and most of the other acts were being watched in a politely interested kind of way without any audiences getting too excited. Then these four young men got on stage and started playing and ten minutes later the area was packed with people. The band was met with huge approval, and arguably stole the show from Steve. At this time they had 2 EPs recorded, and I bought both immediately.
I've listened to Strangeday's music regularly since then, until last autumn I heard they had recorded a full-length album entitled Please Intervene. I had to hear it!

Strangeday are Toby (vocals, guitar), Aaron (guitar, vocals), Ally (bass) and Paul (drums). They play what they call 'smackface rock'. I have no idea what this means, but it's flippin' brilliant.
It's hard to compare the sound to anything mainstream; Greenday might come the closest. It's generally very guitar driven but the bass and drums are by no means just a rhythm section. They're not a band who you would say play a huge variety of music but, like the Red Hot Chili Peppers, this doesn't matter, because it's just great to listen to. On the heavier side of Indie, it would be easy to just crunch out quality riffs and cool bass lines, but song after song the melodies and the sheer energy steal the show and keep you listening repeatedly. One thing you can say is that they have talent, but instrumentally and in terms of song-writing.

The guys are all Christians and the lyrics reflects this brilliantly but very subtly. If I didn't know about their beliefs I doubt I'd pick them up from the music, but given that I know, the songs make a lot of sense. Like U2 really, but more subtle. The songs are mostly about living as Christians day-to-day, often focusing on the hard stuff - if I had to sum up the album in a word I couldn't, but in two words I'd say 'integrity' and 'struggle'. The lyrics are very honest so it doesn't get depressing to listen to but actually is quite inspirational.

I realise I've compared these guys to Greenday, the Chilis and U2, arguably 3 of the biggest 5 bands in the world (maybe with Foo Fighters and Coldplay?). Personally I think they could hold their own with this lot. For a debut album, Please Intervene is very impressive in its maturity. And the EPs, 'Blink and Miss It' and 'Before You Go', are just as good.
they've been together for at least 5 years now which makes me think they aren't going to make it big, but maybe that's not always a bad thing.

To have a listen to Strangeday, go to http://www.myspace.com/makerocknotwar
There are a few songs on there, though sadly not many of their very best. The pick of the bunch is Fogpilot, one of my favourite songs ever.
They also have a few videos on YouTube, just search for Strangeday.
Posted by Unknown at 17:34