Today the British squad for this years World Indoor Athletics Championships was announced, with Dwain Chambers confirmed in the 100m.
Chambers was once Britains brightest talent in Athletics as the only man to run under 10 seconds for the 100m since Linford Christie. He tested positive for the banned substance THG in 2004 and was banned from athletics for 2 years, before trying and failing in an American Football career. He has recently returned to the sport and won the British trials a few weeks ago, a feat that guarantees him a place in the team (he has now been joined by the selector's choice Simeon Williamson). 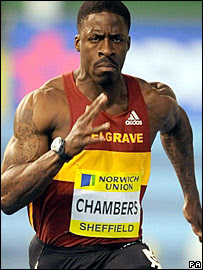 While some have accepted that Dwain has earned his place in the team, many are unhappy that a convicted cheat is representing his country. On one hand, he has served his ban and there is nothing in the rules to stop him from competing. On the other, it sends out the message that doping (drugs cheating) isn't that bad and that cheats always get another go.

It reminds me of a situation in football a couple of years ago. Liverpool, my team, finished 5th in the Premier League in 2005, not high enough to win a place in the Champion's League the following season. However, they also won the Champion's League in 2005 and it was thought that for them to not have the chance to defend it would be crazy. Although the rules at the time said they should not compete in the 05-06 season, a special case was made and they got a place in the first qualifying round (two rounds earlier than they would have otherwise entered the competition).

It's common sense versus the rulebook. The rulebook says Dwain Chambers is free to compete. Common sense says that 2 years is far too lenient a ban in such a drug-plagued sport, and that to send an athlete who claims that the only way to win nowadays is with drugs. In addition, Chambers received a lifetime Olympic ban for his offence, so is it really sensible to send someone to the World Indoors who cannot compete in Beijing in August, when there are plenty of young athletes who could use the experience ahead of the Olympics?
But he won the trials, so he is on his way to Valencia next week.

My question is, if common sense prevailed over the rulebook for Liverpool in 2005, why not this time in 2008 in athletics? I expect it may be because athletics has enough bad press already, both due to drugs and the general underperforming of recent British teams, and if the selectors overlook Chambers he is likely to appeal and win. He is also probably our best medal hope for the men, and medals are crucial for national athletics morale ahead of the last Olympics before London 2012.
Posted by Unknown at 16:36