"Dumbledore is gay": my reaction

Ok, so JKR has said Dumbledore is gay. This has provoked a variety of reactions. Some say it’s great, and shows that people of any sexuality can be great in their field. Some say it has ruined Dumbledore’s character for them. Some are just puzzled as to why it wasn’t mentioned in the books. Some are convinced she made it up on the spot to incite the religious fundamentalists. 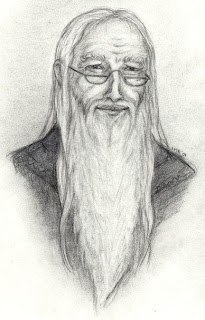 In an interview a few days after the revelation, JKR said she’d known Dumbledore’s sexuality since before book one was published. This is consistent with how she has written the books – she knew basically all of it before book one came out in 1997. She’d already been working on it for seven years. I’m happy to take her word for it. She didn’t make it up on the spot. The reason she actually revealed the information was that she was asked a very direct question by a fan, something along the lines of ‘Dumbledore was a great advocate of the power of love, but did he ever fall in love himself?’ In case you haven’t heard, it turns out that Dumbledore was indeed gay and had a youthful infatuation with his friend Gellert Grindelwald. This of course makes Dumbledore’s story even more tragic. Not only did he lose his father to Azkaban, his mother to a premature death, his sister possibly by his own hand, and the friendship of his brother Aberforth, but he also lost the man he loved. This would also explain why it took Dumbledore so long to agree to hunt down and defeat Grindelwald. Ironic that love, the supreme virtue according to Dumbledore, was essentially the cause of World War 2. The reason that Dumbledore’s sexuality wasn’t explicitly stated in the books is because it wasn’t relevant to the main Harry-centred plot.

Normally this would be all I have to say on the subject, but the reaction of some fans has surprised me a little. It’s those who say that the character of Dumbledore has been ruined for them, and they’ll never look at him the same way again. Some have even said it puts a new angle on his relationship with Harry, or they’re now not sure whether to let their children read the books.

I don’t have a problem with Dumbledore being gay. I haven’t read the books since the announcement but I don’t think that Dumbledore being gay will have any bearing on the plot. The only difference is that there will be a different slant on his relationship with Grindelwald compared to before we knew of his sexuality. I fail to see how his sexuality can ‘ruin’ his character. Some will say that homosexuality is wrong. Regardless of my own views on that subject, since when was Dumbledore perfect anyway? We already know that in his youth he had a similar ideology to that of Voldemort! JKR was careful to make sure none of the major characters came across as flawless, not even the saint-like Lupin. Dumbledore being gay doesn’t make him any less powerful a wizard, any less intelligent or wise, any less kind or noble. Dumbledore being gay is just another piece of information about a character in the books that has a slight effect on how we view one of the relationships in the story.