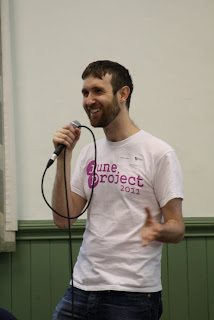 Chris Juby is a friend of mine from church.  I've known him for about 6 years.  In that time I've come to realise we are quite similar in some ways.  We're both geeks.  We're both into music.  We've had the same phone as each other for the last 5 years.  Talking to Chris is something I find easy to do, but is always an 'experience'.  The guy has all sorts of bizarre and interesting knowledge.  I remember having lunch together once and covering topics such as number plates, phone numbers and postcodes.  You wouldn't think these would be interesting, but Chris has a way of making them interesting.
Chris is a really deep thinker.  I like this, because it make me feel less strange for being one too.  But while my thinking is very analytical, Chris' is...visionary.  He sees stuff I had no idea could be seen.  He even has a theology of Mary Poppins, which sounds bizarre but actually makes a lot of sense when you hear it.  Chris has so many ideas and plans and thoughts in his head that he's been thinking about and praying about and investing in - it's really quite staggering.  I don't think I know anyone else who has as much vision for things as Chris. 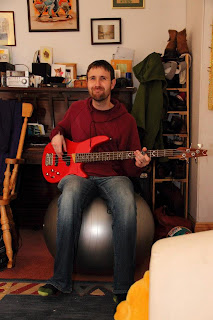 He is also hilarious.  He'll do or say something completely off the wall, and then laugh to himself for a few seconds while everyone else takes a while to get it.  Then you'll realise it's funny, but by that time he'll be making another joke.  When he gets on a roll he can keep me entertained for hours, just talking and giggling away to himself.

Chris leads worship at our church.  I remember talking to him a few years ago about Matt Redman, and he said 'when Matt Redman leads worship, you get the feeling he's been praying about it for, literally, years'.  I get the same feeling when Chris leads worship.  He is so good at understanding what's going on in the room and in the congregation, and leading them on.
I've always thought that Chris exudes a kind of quiet self-confidence.  He knows his strengths and weaknesses but doesn't become defined by them.  I like that.
Chris is a bit of a role model for me.  But don't tell him that, he'll be embarrassed...