I went to see Athlete last night.  Only 6 out 11 of us made it.  Damn snow.
Anyway, it was very good.  Two supports, who got on slickly and didn't play for overly long.  Stoney were very good, probably the best support I've seen since The Kissaway Trail a few years ago (coincidentally at the same venue).  Alice Gold was ok, fairly average support. 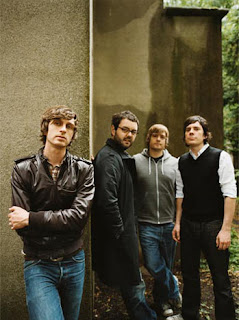 Athlete opened with only Joel on stage, with an acoustic guitar.  He played You Got The style - it was very cool but the crowd were appalling.  It was a bit empty due to the snow, but even so...it felt like I was the only one singing and indeed, when Joel stepped back from the mic so the crowd could sing a line alone, they did not sing! However, it was a cool way to start the gig.  Then the rest of the band came on and went into Superhuman Touch and Hurricance, both of which sounded good and were fun.  Then Twenty-Four Hours took me by surprise.  It's not one of my favourite songs of theirs, but they played it brilliantly and really built up the second half.  I actually felt my jaw dropping.  One of the highlights, and the most unexpected.
Then came Beautiful and Black Swan Song - both great singalongs, both nailed by the band.  The crowd were a bit more into it by this point.  It had also become clear by now that one thing that was making this a decent gig was the lighting - it's hard to describe and I'm in a lazy mood, but it was some of the best gig lighting I've seen.  Tres bon.
Anyway, the second half of the gig then mellowed out a bit - Back Track was lots of fun, El Salvador was very well received, then Tokyo, Out of Nowhere, Westside and Tourist.  Then came the Outsiders.  This one was excellent, really cool, and they played the long outro which was good to see.  Finally Wires (obvious but good ending) - the crowd were much better by this stage and were singing along heartily.  The song ended with only Joel on stage again, playing a repeat of the middle eight.
The encore was excellent too - The Getaway, Half Light and Chances were three of the best all evening so we finished on a high.  Chances in particular was a great way to end.
The band performed well.  There wasn't quite enough adaptation of the songs for my liking, but Joel is a great frontman and there were all good to watch.  Plus the lighting was awesome.
Highlights: 24 Hours, Beautiful, and the last 5 (Outsiders to Chances).
Posted by Unknown at 09:28

same set list as us, though he switched tokyo for vehicles and animals on an impulse for ours. sounds like we were a better crowd - everyone was loving you got the style. i think twentyfour hours was the one that really got the crowd completely into it though - it was amazing.

agree with the rest though - i also noticed that the lighting was excellent and thought he was a brilliant front man.