Beauty and the Geek/Tribute to Tara McComas 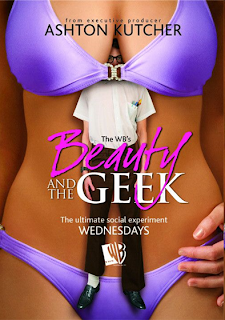 Strangely, I really like this show. I generally despise reality TV, but Beauty and the Geek is one of 2 exceptions (the other being the genius that is The Mole).

If you don’t know, here’s a brief description of BATG. Ten ‘beauties’ - attractive, bimboish females with very little common sense or general knowledge, and certainly no specific knowledge, and ten ‘geeks’ – men with no style or social skills, but incredible brains, are put in a mansion together.

The beauties and geeks are paired up and each episode they have to complete challenges – one for the beauties and one for the geeks. The beauties challenge will be something to do with maths, science, logic etc – typical examples are computer assembly, library searching and debating. The geeks challenge will be about socialising, fashion etc – typical ones include dancing, party planning and getting girls’ phone numbers. In each pairing, the beauty and the geek have to teach each other what they will need to succeed in the challenges. The winners of each challenge get to send a team to the elimination room, where two teams take a quiz about what they have been learning. The losing team is eliminated.

The brilliant thing about BATG is that it forces the contestants out of their comfort zones and pushes them into completely alien situations. They are forced to learn from someone completely different to themselves and they learn to be more rounded people. The transformations that you see are incredible and inspiring. The show is essentially about making better people.

There is one thing that occurs in every series, is seen as the highlight, and which, for some reason, I don’t like. This event is ‘Geek makeover day’. The girls get to makeover the boys (should that be make the boys over?). They choose new clothes, hairstyles, beardstyles, and accessories. And it has a great effect – some of the transformations are literally jaw-dropping. While watching part of the fifth USA series, I understood what had been niggling at me about the Geek makeover. This will also lead into some other comments about some of the contestants.

The geek makeover came and went, and all the geeks were transformed. Many commented on their new confidence as a result of the makeover. Joe, however, did not like his new look at all. It had taken away the little confidence he’d had. While talking about this, he made some comments that made me realise why I didn’t like this part of the show:

“I was hoping that in the makeover they would respect my conservative ways, respect generally who I was and the look I was going for and build constructively upon that instead of saying ‘well that’s nice who you are but it has no relevance upon regular society.’”

“I actually hate this look, I can’t stand this, I’m not used to this. This is not me this is not who I am.”

“It’s so difficult to have such a great amount of faith in somebody when they’re telling you everything you’ve done up to this point has been wrong.”

“…to give up something that is so close to you, for somebody else’s agreement of what is fashion and what isn’t.”

That last one is the clincher – the geeks were transformed into what was somebody else’s idea of fashion, and on this occasion, one geek just hated it. I have no problem with trying to look good, but I resonate with Joe’s first comment, that his style and conservatism should have been taken into account.

I could rant for ages about fashion, but it would get boring. But I want to say that the main problem I have with fashion is that it dictates how people should look, and it dictates what is and isn't attractive. This should be for individuals to decide. I think it's great that the makeovers give the geeks massive confidence boosts, but Joe's situation highlights the problem - not everyone agrees with 'fashion'!

Now onto the other comments.
To introduce the central characters:
Tom – a friendly, popular geek who by this point in the series had really come out of his shell
Randi – a very loud, insulting and obnoxious beauty who had changed very little so far
Joe (pictured) – a very difficult geek who is attention-seeking, melodramatic, and struggles to engage with the challenges
Tara (pictured) – Joe’s partner, who finds him difficult but has been persevering graciously 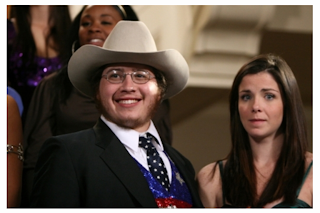 Soon after the makeover challenge, talk turned to the supposed hauntedness of the mansion. Tara in particular was terrified of ghosts, zombies etc, and had been having nightmares. While Tara and Joe were asleep in their room, the other contestants decided to play a prank which involved dressing Tom up as a vampire and trying to scare the sleeping Tara. When they came into the bedroom, Joe woke up and stood in their way, saying he didn’t like the joke and wouldn’t let them do it. He was defending his team-mate. Randi became incredibly rude to Joe, including making comments about how he and Tara were performing as a team. The abuse was really quite relentless and staggering, and in the end Joe lost his patience and, as he couldn’t get a word in edgeways, he spat at Randi’s feet. This sent Randi into even more of a tirade, and most of the other housemates were suitably shocked at Joe and sided with Randi, although a couple saw sense and pointed out that Randi was not blameless. Joe did the only thing he could and walk away to sit in the kitchen. Tom, feeling it was partly his fault, being the one dressed as a vampire, went to talk to Joe, while two of the girls woke Tara and told him Joe had spat on Randi – a subtle but significant misrepresentation of the incident. Tara came downstairs to find Randi in full flow in Joe’s face, and with literally the most composure and grace I have ever seen on TV, managed to calm Randi down a bit and took Joe away.

Firstly, I was disappointed with how most contestants took Randi’s side and put the blame on Joe. Randi ranted at him for ages and was very insulting. Joe made one slip, but apart from that was calm and dignified. Everyone makes mistakes, and Joe did. But Randi’s behaviour wasn’t a slip, it was malicious. That is surely harder to forgive.

Secondly, the really amazing thing was that, after all Tara’s problems with Joe – he stank, he snored very loudly, he was always negative and fed up, he contributed very little to their team, he was self-centred and an attention-seeker – after all that, and after hearing he had spat on someone, she came down and helped him out. She stood by him, and defended him, even though most of the time she couldn't stand him. It was an unbelievable spectacle of grace. Joe had been, by a mile, the most difficult geek in BATG history, because he just didn’t try to change. Tara was, equally, the most amazing contestant in BATG history because she just persisted with Joe – she kept on encouraging and forgiving him, even when he didn’t change. It was magnificent to watch.

So this is really a tribute to Tara McComas, who is genuinely inspirational.
Posted by Unknown at 19:12

Email ThisBlogThis!Share to TwitterShare to FacebookShare to Pinterest
Labels: Beauty and the Geek, fashion, Tara McComas

I think I identify with Joe partly because we're in similar situations in a way.
He was known as 'cowboy Joe' - he war cowboy gear all the time, and it was part of his identity. It was difficult for him to give this up.
I have what is clearly unfashionable hair, but I like it and it's become, in a way, part of my identity. I would find it difficult if I had to give it up without my consent.

I don't really know how to use this stuff but I want to thank you for this article. That show was very difficult and I appreciate that you understand where I was coming from. Tara McComas

Hi - thanks for commenting (if you are the real Tara!). It looked like a really tough show, but I loved watching how people changed on it, and especially how you dealt with that situation. I guess a lot of things will have been edited out, but from the way it was shown on TV I thought you were brilliant.