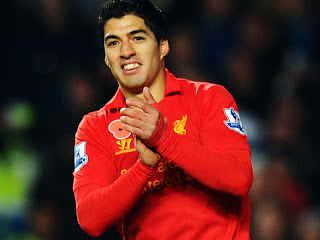 Luis Suarez has been in the headlines a lot this week.  He has recently been banned by the FA for ten games, for biting an opponent in a match last week.  He was previously banned for seven games in 2010 for biting, while at his former club Ajax.
There are several point to make in reaction to this.

1.       Biting is not appropriate on any sports field.  In football, it is classed as violent conduct, warranting a red card and at least a three-match ban.
2.       Players sent off for violent conduct are often banned for more than three games by the FA.  Di Canio was banned for 11 games for pushing a referee in 1998.  Prutton was banned for 10 games for the same offence in 2005.  Thatcher got 8 games for elbowing Mendes in 2006.  In most non-sporting professions, such offences would warrant a sacking.  Why not in football?
3.       This is the longest ban a player has been given for violent conduct against another player in England.  The only longer bans are for acts against referees, fans, or for drug offences.  The exception is Joey Barton’s 12-game ban, but that was for two counts of violent conduct rather than one.  Why has this offence been given a significantly longer ban than many other counts of violent conduct?  What is inherently worse about biting than stamping, spitting or headbutting?
4.       Jermaine Defoe bit an opponent in 2006 and was given no ban because the referee saw the incident, and FIFA have a policy that means that players cannot be retrospectively punished by football associations if the referee has already ‘dealt’ with the incident.  This policy is understandable, because they want to empower the referees.  The policy is also laughable because the best way to empower referees is with a system of TV replays and challenges, a system that shows no signs of becoming available.  Referees should be able to use replays like in rugby, for incidents such as infringements in the penalty area or when players are accused of something like biting.  Team captains should be allowed, say, two challenges per half, like in tennis, to challenge decisions like dives and offsides.  I have made this argument so many times, I am getting sick of it. 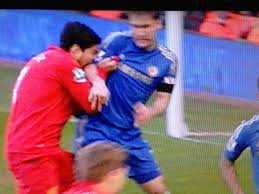 5.       There are two issues here – that of retrospective punishment, and that of the length of Suarez’s ban.  Much of the discussion over the ban has been to do with consistency.  Why ten games, where similar incidents have warranted fewer?  Is biting an opponent worse than racist language but not as bad as pushing a referee?  Is this a longer ban because it is the second time he has bitten an opponent?  If so, why has this not been clarified?
6.       The bottom line is that Suarez should be banned, but he should be banned in a way consistent with other similar incidents.  On a related note, the way games are refereed needs to change, and has needed to change for a while now.

How long should the ban be then? The FA's statement yesterday shows why they arrived at the 10 game ban. What is really needed is a thorough investigation into how long bans should be for various types of violent conduct. Violent conduct, unfortunately, is too vague a term today.

Possibly 7 games, like it was in 2010. Possibly 8, like for Thatcher's elbow. Possibly none, like for Defoe. The point isn't how long the ban is, it's how inconsistent it is.