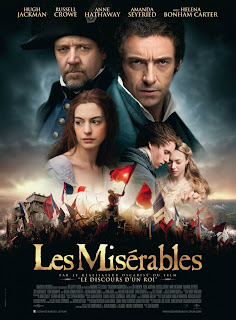 I saw it last night.  A few comments follow.
It was, overall, excellent.  The cast do a great job.  Russel Crowe is fine, nowhere near as bad as people have made him out to be.  Anne Hathaway and Hugh Jackman are just as good as everyone says.  Jackman's probably even better.  Amanda Seyfried particularly impressed me as this is the only time I've seen Les Mis (I've seen it 4 times now) and haven't got fed up with Cosette's drippiness.  It's strange that I, as well as many others I have spoken to, normally root for the young Cosette but the adult Eponine.  Here I rooted for the adult Cosette as well.  Sacha Baron Cohen and Helena Bonham Carter were hilarious, and Eddie Raymane was very good.
Obviously, the music was superb.  That's kind of the point.  But I thought the volume was too low.  I don't know if it's the cinema we went to or the film itself, but I was occasionally underwhelmed.  I sometimes felt a little distanced from the screen in a way that doesn't normally happen, because of the low sound levels.
Yes, I cried.  And, because people will ask, I cried at I dreamed a dream, Did you hear the people sing?, A little fall of rain, Drink with me, and Finale.  I was particularly gutted that they only did one verse of Drink with me. 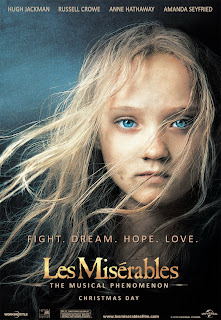 There were some negatives, but the main one is not the fault of the film itself, it's the fault of the source material.  I always think that after the climax of The final battle, the sewers, and Javert's suicide, the show takes too long to end.  Empty chairs is excellent, and I guess Every day is necessary, but Turning is excessive and Beggars at the feast just doesn't fit with what's going on.  It spoils the mood.  Because the film includes everything in the musical, it has these weaknesses.
I've noticed how often this is the case.  Lord of the Rings is such a good film because the source material is so good.  I enjoyed the middle section of Life of Pi but thought the first act was boring and the ending just laughable - but that's more the fault of the book than the film adaptation.  The weakness in the Les Mis film is, similarly, down to the source material rather than the film itself.
However, overall, it was excellent.  Let's just say that the pre-race favourite, The Desolation of Smaug, certainly has it's work cut out to be named my film of the year in 12 months time.