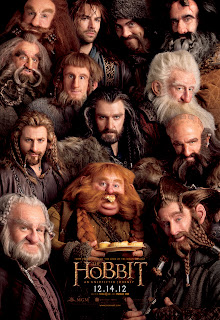 Here are my thoughts, in a slightly structured but slightly random order.  I will try to limit comments on large scale adaptation of the book until I've seen all three films in a couple of years.  Spoilers follow.

Email ThisBlogThis!Share to TwitterShare to FacebookShare to Pinterest
Labels: Lord of the Rings, The Hobbit

I wondered if the Nazgul theme for Azog meant that, eventually, PJ and co were going to tie him very explicitly into the "growing darkness" motif - i.e. that Azog is essentially a pawn/tool for Sauron's growing power? Or something like that. (Which would be not unrelated to the same sort of worry Gandalf expressed about Smaug at the white council...?)

There would obviously be positives and negatives to a move like that, but it could potentially make the Battle of the Five Armies seem a bit less spontaneous and more ominous. The safe bet is, of course, that PJ and Howard Shore (who is incredible - I'm on my 10th listen-through of the soundtrack) are always being deliberate with the score, so something's got to happen with this...

That's the best theory I've heard. You could well be correct.

I must admit the use of the Nazgul theme annoyed me in both viewings. If Orrey's theory is correct then that makes sense, but I felt like in the film it was being applied to Thorin rather than Azog in that scene which made no sense. As Orrey said though an obvious error of this kind would be very uncharacteristic to say the least.
Also after multiple viewings I don't think many of the dwarfs were actually characterless there just wasn't time to develop most of their characters in the film. Many of the dwarfs though are given lines of a consistently similar nature, when they have lines at all. Hopefully more of them will be given more 3-dimensional characters as the later films (and extended editions)are released.

Fine review Ben. Basically, if you are a fan of original The Lord of the Rings trilogy, then there will be some thematic stuff here to enjoy (mostly near the end of the film) but otherwise don't bother with this one because it’s not perfect, it’s just alright.