The ending of The Lord of the Rings 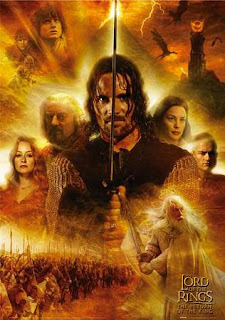 As most people know, LOTR is by far my favourite film. Many other people seem to like it a lot too, but come up with one consistent criticism: ‘it has too many endings’. Here I attempt to explain the need for these ‘endings’ and prove that there are not too many. I believe that if a viewer thinks there are too many, he or she has missed the point. I will be looking at the epilogue from a cinematic point of view, rather than as a fan of the book.

I assume that this ‘epilogue’ begins when Frodo and Sam have run out from the Crack of Doom, having destroyed the ring, and Barad-Dur has fallen, and there is a fade to black just after Frodo says “the end of all things”.

After this climax, several things happen in sequence.

These scenes can be summarised as (1-2), Coronation (3), Return (4-7) and Farewell (8-10). In total, they take almost exactly 22 minutes. This is at the end of a 12-hour film, so the final section is about 1/40th of the total film time. That’s the equivalent of a 3 minute epilogue on the end of a standard 2 hour film. Not really ‘too long’, is it? Mathematically, the epilogue is clearly not overly long. The issue must therefore be that viewers expect the film to end right after the Crack of Doom climax, and are frustrated at having to wait another 22 minutes with a full bladder. There are 2 problems with this viewpoint: one is logical, the other is story-based.

Consider the alternative to the epilogue: the film ends with the fade to black after the climax. What would you think? Surely someone who has watched the films attentively would have questions such as ‘So did Frodo and Sam die?’, ‘Does Frodo ever meet Gandalf again?’, ‘What happens to the Elves?’, ‘Do Faramir and Eowyn get married?’, ‘Are Aragorn and Arwen reunited?’ If the films stops at the climax, many questions are left unanswered, and the viewer would be left unsatisfied and also, I expect, a little stunned by the abruptness: 12 hours of drama just stops. No runoff or anything. It would be like The Return of the Jedi finishing with the Emperor’s death, and no scene between Luke and Vader or celebration afterwards. Or Shawshank finishing with Red’s release and without his reunion with Andy. Some sort of epilogue is needed to let you down gently, as it were.
That’s the logical part: looking at the alternative, we see that an epilogue is needed to let us down gently and tie up the loose ends of the story.

The obvious counter-argument here is ‘ok, but why so many endings?’ Well, with such a long and complex story, there are simply a lot of loose ends to tie up. This is the story-based part.
The section is very standard – the hero meets up with his mates. Of course, in this story, there is the added moment between Gandalf and Frodo (who still thinks Gandalf is dead). They need this moment, as do Aragorn, Merry, Pippin et al. This scene brings closure on the relationships that have developed within the Fellowship and for this reason

is necessary.
The Coronation is vital. It ties up Aragorn’s lost-heir story, reunites him with Arwen (who he believes has left him), and also gives a beautiful moment between him and the hobbits. It is not possible to argue against the inclusion of this scene. It finishes off so many storylines.
Many would have the film end there. But they would be forgetting that this is essentially a story about Frodo. Yes, Sam, Gollum, Aragorn and Gandalf are crucial, but Frodo is the central character. It’s his story, and it needs more closure. He cannot finish in Gondor, hundreds of miles from the home he loves an

d set out to save. The Green Dragon scene brings out one of Tolkein’s themes – that only those who have seen war can really appreciate what it was like. The other hobbits are oblivious to what has happened outside their borders. This scene also leads the viewer to expect a complete happy ending, which is a crucial setup for what is to come. The scene in Bag End then shows the real cost to Frodo. As Galadriel predicted, the quest does, in the end, cost him his life. Not his physical life (yet), but he loses everything that makes life worth living. That is why he leaves on the boat – he cannot live in Hobbiton any more because the Ring has had too much affect on him. LOTR is essentially about the effect of evil on the world, and that’s the effect it had on Frodo. So the Return section brings us back to Frodo, and the Shire.
Given that Frodo can’t live in Hobbiton anymore, the Farewell section is also necessary. It also happens to be possibly the most intense, bittersweet scene I have ever seen on film. The Grey Havens scene is the true climax of LOTR.

I think many people don’t completely understand what is going on in the Return and Farewell sections of the epilogue, which is why I have spent some time explaining them a bit here, though I’m sure there’s stuff in there I don’t understand either. I believe that if people understood what was happening to Frodo, they would enjoy these scenes more.

I haven’t yet mentioned Sam’s wedding or return to his family. Strictly speaking, they are not necessary as they are not part of Frodo’s personal story. However, as Sam played such a big role in the previous 12 hours, I think it’s e

ntirely appropriate to show his eventual marriage to Rosie, especially after it becomes clear in Mordor that he thinks he will never return home. It’s good to see him happy in the end.
Personally, I would have skipped the final scene, and finished with the fade to white after the boat leaves. That way, the final emphasis is on Frodo. The filmmakers added in Sam’s return fro a desire to finish like the book, the last line of which is “Well, I’m back”. That’s their decision, and while I disagree with it, this is not a reason to say there are too many endings. It takes about 30 seconds, and reminds us that the good side did win, albeit at a cost.

So, mathematically, logically, and story-wise, I don’t think there are too many endings. Mathematically, the epilogue to LOTR is the equivalent of 3 minutes at the end of a 2 hour film – entirely reasonable. Logically, not having the epilogue would be too abrupt and would leave too many loose ends. Story-wise, the and Coronation are needed for closure and too tie up loose ends, and the Return and Farewell are actually the real end of Frodo’s story.

Email ThisBlogThis!Share to TwitterShare to FacebookShare to Pinterest
Labels: Films, Lord of the Rings

I love you Ben! Nothing of the above I don't disagree with :)

Can't help but feel that the missed out the major ending of the scouring of the shire... however I will forgive them

I just had somebody complaining about the "false endings." I'll send them this link, you do a very good job of explaining it.

Would have loved to see the Scouring of the Shire included...

Hey - thanks for the encouragement.
Scouring would have been interesting, but would have added another 15 minutes or so which I think would have been too long. It's not strictly necessary in order to finish off Frodo's story.