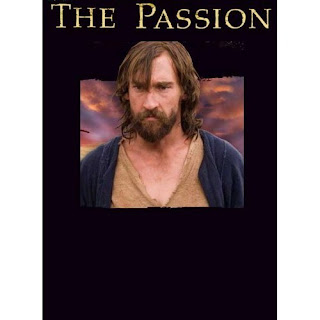 During the week leading up to Easter, the BBC screened a four-part drama about the last week of Jesus' life. I watched it, and thought it was very good. It was quite unlike other 'Jesus films' I've seen, I think partly because it focused on Jesus humanity more than the others do. It seems to me that most portrayals of Jesus have him quite aloof and detached from what is going on around him, whereas in this version, we see him crying and laughing, telling jokes, and just being human! Joseph Rawle, who plays Jesus, said that a major inspiration for how to play the role was Philip Yacey's 'The Jesus I Never Knew', especially a single line: 'God didn't cheat' i.e. he felt everything a man could feel. Very interesting.

Also, the whole setting seemed more 'real'. The mania of passover and the politics between the priests, the Romans and the people was shown very clearly. And the filmmakers also managed to show almost everyone in a good light. We see the motives behind the actions of Judas, Pilate and Caiphas, and sympathise with them. It just seems to be showing a much more realistic story of what must have been going on.

As the drama moved closer to the crucifixion, the flow was lost a little, I think because the filmmakers were concerned to include as much as possible of what happened, whereas earlier they had been more liberal. This made the third and fourth parts seem a bit disjointed, as though they had got a selection of scenes and just stuck them one after another. But other than this minor point, it was a really good piece of TV. Watch it if you get a chance.
Posted by Unknown at 18:12

Email ThisBlogThis!Share to TwitterShare to FacebookShare to Pinterest
Labels: Easter, Review, The Passion

I sadly was not able to see it. He you seen Passion of the Christ? What did you think of that/how did it compare?

Yeah, I saw The Passion of The Christ (hereafter POTC) a couple of years ago. POTC and The Passion are quite different really. POTC is basically just the last 24 hours, whereas The Passion covers the whole week.
I thought POTC was good in terms of the reality of the torture, but other than that it didn't seem to have much point. The Passion gave a much more overall view of Jesus' last few days.
As I said in the main blog, I think The Passion is the best Jesus film yet.