For a couple of years, I have ranked every film I have watched that year and written a bottom to top list here at the end of the year.  this year will be similar, though only the top 9 will actually be ranked.  Below that, things will be more merged.


Films I wished I had never watched:
Shame.  "It has Carey Mulligan and Michael Fassbender in", I thought, "it must be great".  It wasn't.  It was awful.  A slow-moving string of sex scenes.  One of the worst films I've seen, ever.  Mulligan is great, as is Fassbender.  But they were wasting their time.


Films I watched but they weren't that good:
Lion King 3.  The story of the Lion King from Timon and Pumbaa's point of view.  Vaguely entertaining at times.  At least it was only about 70 minutes long.

The Tourist.  Entertaining but, if I remember correctly (I can't remember it that well), completely unconvincing in the final third.

Mulan.  It's ok.  Fairly standard Disney animated film, with all the features and flaws you'd expect.

Blade.  Some cool stuff, but mostly just quite silly and over the top.

The Nativity.  Kind of funny, kind of moving, but mainly just exasperating and incredulity-invoking.

The Great Gatsby.  Leonardo DiCaprio and Carey Mulligan need to choose better films to act in.  Had the fatal flaw of not actually having an interesting plot


Films that were reasonable:
3:10 to Yuma.  Christian Bale was the attraction.  This was a reasonable film.  I have nothing against it, just nothing much to write home about either.

The Greatest.  Carey Mulligan was the attraction.  This was a reasonable film.  I have nothing against it, just nothing much to write home about either.

The Adjustment Bureau.  Nice idea.  Gripping and exciting.  Horrible, awful ending, and very poor explanations of what is going on.

Jarhead.  Better than most war films I've watched, probably because there wasn't a huge amount of war in it.  Having said that, I wouldn't bother watching it again.

Saving Mr Banks.  Fun but unsatisfying - not enough about the creation of Marry Poppins as a character, and not enough links between the two main plotlines.

9.  The Kingdom.  Quite interesting, kept my attention very well.  I enjoyed this film.

8.  Contraband.  Not much more than a standard action/heist film, but it does that well.

Top quality, the top five, the ones I'd really recommend: 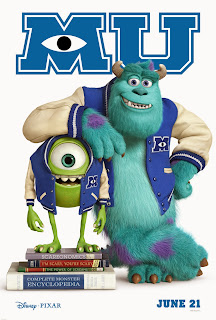 5.  Monsters University.  An excellent film in it's own right, very entertaining.  Brilliant references to both university life and Monsters Inc.  One of the very best Pixar films.

3=.  This is England.  Full on intense.  Brutal and real.  Excellent acting all round.

3=.  Catching Fire.  Quality, just like the first film.  Everything the first one did well, this one matched.  The one main weakness was the rushed ending.  If they can avoid screwing up the transition from one final book into two films, and stay faithful to the book, this will be an excellent trilogy.

1=.  Les Mis.  You have to be a special film to reach top spot, even joint top spot, when there's a Middle Earth film in the list.  Les Mis was superb.  Fuller review here.

1=.  The Hobbit: The Desolation of Smaug.  By no means perfect.  Major flaws.  But the good stuff is so good, and the adaptation is so difficult, that even with it's problems, it's still an excellent film.  More discussion here.
Posted by Unknown at 13:17

Email ThisBlogThis!Share to TwitterShare to FacebookShare to Pinterest
Labels: Films