The Convincingness of Atonement 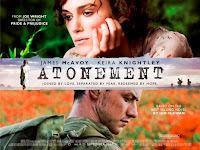 If you're looking for a theological post, unlucky.  This is about the film.  You'll need to have seen it to understand what I'm on about.  I watched Atonement a couple of weeks ago.  I was disappointed - not because it wasn't 'my sort of film' or because I didn't like the acting or anything like that.  Simply because it did not convince me.  The plot was not convincing.
Arguably the two main plot hooks are the relationship between Robbie and Cecilia and the false accusation of rape made by Briony.  The rest of the plot hangs on these.  But the Robbie/Cecilia relationship was unconvincing to me - I just did not believe their mutual attraction.  And the idea of the false rape accusation was also very difficult to believe.  On top of this, the idea that Robbie sent the wrong letter to Cecilia (the short, typed one rather than the longer, handwritten one) is similarly unbelievable, even laughable.  Many parts of the film were quite good, but because the whole plot hung on a series of situations which I was not convinced by, I thought the film was poor.
It is probably worth mentioning here, the difference (in my head at least) between 'unrealistic' and 'unconvincing/unbelievable'.  Most films are unrealistic, from Toy Story, to LOTR, to Fight Club to Notting Hill.  But the stories are skilfully told and the settings are skilfully designed so it is possible to suspend disbelief for the purposes of the plot.  In LOTR for example, while orcs and hobbits are clearly not real (unrealistic), given the intricacy and complexity of the world shown on the screen (or in the book), I do not find the story unconvincing. I completely believe it as a story set in that world.  Atonement is more realistic by far, but far less convincing - I can believe the existence of the characters and places, but it is so poorly done that I am not able to suspend my disbelief to believe the story.
To me, what is important in a film is not whether it is realistic but whether it is convincing.
Posted by Unknown at 23:07

Email ThisBlogThis!Share to TwitterShare to FacebookShare to Pinterest
Labels: Atonement, Convincingness, Films, Lord of the Rings

The relationship is WAY more convincing in the book. I was disappointed by that aspect of the film too.

What about the rape accusation and getting the wrong letter?