...and all the Kings men

About a year ago, I read a book called 'Why Men Hate Going To Church', by David Murrow. It was basically about why and how the church is geared more towards women than men. One thing the book discussed was the relative proportions of women and men attending church services.
I decided to find out what sort of 'gender gap' my own church, Kings Church Durham, has. Each Sunday service from September 2009 to July 2010 I counted the number of over-18 men and women at Kings. I decided on the over-18 cutoff because young children are generally brought to church by their parents, rather than of their own accord and, while teenagers tend to have more choice, I had to make a cutoff somewhere.
I counted numbers at each different type of Kings meeting – Morning Worship, Crux, Connecting with God, prayer evenings, evening services, evening guest services and the AGM. I used the numbers to produce a simple percentage – the percentage of the congregation that were male. I also calculated a 'minus team percentage' – the percentage if the 6 female and 10 male staff and interns are discounted, as they are required at the services as part of the job.
All this resulted in many Excel spreadsheets and graphs, but the most important are below: 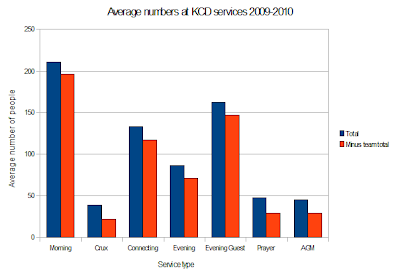 The average totals for each service are interesting but not that unexpected. For reference, the most people at any service was on 11th October, at 313 people. This was the first Sunday of the student year. The highest at Crux was 48, Connecting was 149 and prayer meeting was 52.
The male percentages are much more interesting. Here they are in table form:
So, overall, Kings has averaged 43.9% this academic year (41.31 excluding team). Morning worship is typical of this percentage. Connecting, joint evening services and evening guest services are slightly lower. Prayer meetings, the AGM and Crux get successively higher, up to 61.32% male at Crux (60.48 excluding team).
A few comments:
The overall message?
Posted by Unknown at 15:25

1. Perhaps churches should incorporate more 'thinking' services or items in their programs; or,

2. Men should learn to engage more with 'emotional' services or items?

Or perhaps we shouldn't be thinking strategically at all!

Great post Ben. For the sake of the non-Kingsians, could you explain what 'Crux' is?

Nice work, Benbo! Impressed with your dedication here, and nice graphics, too. Not sure what we can learn from this. Maybe the next thing is to do a survey of men at Kings with a little questionnaire ...

Tom: AGM = annual general meeting
Teabag: I agree. Also, who are you?!
Joe: Crux is the first of our two evening services during uni term time (see website for more)