This is my review of the new album by Delirious, entitled Kingdom of Comfort.

Two tracks from the album (God is Smiling and We Give You Praise) had already been made available for download from the band’s website, so I’d had a bit of a taster already. The band were saying that this album was another step for them, was the hardest things they’d done, and was all about the hypocrisy of how we preach love but live in the comfort of wealth. I’d only been gripped by one of the two pre-released tracks, and had heard that the new stuff was ‘ok’ (said by a big Delirious fan). So to be honest I was a bit worried that the new album would be full of pretentious preaching, which I don’t think Delirious would do very well.

When the CD arrived, it came in a vacuum-sealed plastic case which will be rubbish for storage. I’ve no idea why they did this, it seems very silly. However, it did come with a little book which included the lyrics, some artwork, and some writing about some of the themes of the album. This was very cool, and said some things that Christians need to hear.

I’ll take the songs one at a time. The marks out of ten are with respect to this album, so 10/10 is the best this album has to offer, 1/10 makes me wonder why they included it. However, overall it’s a really good album, so 1/10 doesn’t mean it’s a bad song, nor does it mean it’s only a tenth as good as the best one! Overall, it's a good album. Not their best, but I think it's better than at least Audio Lessonover and Mission Bell. I couple of weak tracks (generally the slower ones), but also some absolute crackers.

The album opens with this mostly chilled song with an unusual sound. It was an unexpected sound that I wasn’t sure about to start with, but it grew on me quickly. The song it a simple prayer “Save me, save me, from the kingdom of comfort where I am king” – this is the heart of what they claim the album is about. It’s possibly their most alternative song yet, with a slightly eerie feel. It starts with just vocals and guitar, but after a couple of minutes the bass and drums kick in, creating a very cool sound. A solid opening to the album.

This song begins with a very catchy riff, and it is easy to see why it was a pre-release download. It has a very positive message – “God is smiling over us”, “where hearts are broken love unites”, “our love can be the revolution that sees your kingdom come”. The challenge is to take God’s love and values to the world, but it doesn’t get overly preachy because it’s a song of such hope. Sound-wise, God is Smiling essentially belongs on World Service. Each of the first 5 Delirious studio albums seem to have its own sound – The Mezzanine Floor just sounds like a Mezzamorphis song, Sanctify just sounds like it’s off King of Fools etc. And this song sounds like World Service! Very like Rain Down, God in Heaven, With You, with soaring lead guitars which build to crescendos. A quality song.

If I didn’t know better, I’d think this song was by Oasis. Rocky guitars, driving rhythms, even the sound of Martin’s voice. It’s not quite catchy enough though – it sounds like average Oasis rather than Don’t Look Back in Anger or Slide Away. It really doesn’t sound like Delirious! It has a simple message – give what you’ve got, do what you can, keep going, don’t get discouraged. It’s a decent song, but nothing extraordinary.

Many people say this is the highlight of . It continues the more mysterious, alternative sound of the album (God Is Smiling being the exception so far). This song has an awesome message - love beats everything. The chorus is catchy without being anthemic which is nice and interesting from Delirious. It sounds most like The Mission Bell, especially in the verses. The bridge and chorus is where the new sound is. There’s a really good use of keys – they dominate more than usual, with the guitars being more rhythmical. It’s another outward looking song about spreading God’s love. A really good song, one of the highlights of the album.

This song is chilled but not ballady. Think of Follow. It has a really cool ‘groove’, you can’t help nodding your head! It’s directed more to God than outward – it’s about God lifting us up, with some Isaiah 40 imagery. In the context of album, it’s probably about how we have to live in God’s power and strength, recognising that we need him. A very unusual song for Delirious, but a good one. 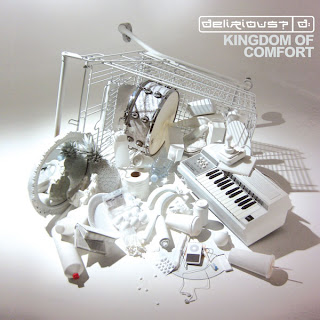 The was the other pre-release track, about how life is tough but we still praise God. Piano-driven again, and ballady. The verses are good, but the chorus is a bit dirgey – there’s not enough going on in the background, just chords and vocals – it needs more interesting guitars and/or keys. The lyrics are good, but Delirious’ slower, quieter stuff tends to be weaker sounding (Mountains High being the main exception). Not a bad song at all, but they have a high standard!

Another slow, piano driven song. It sounds a bit like Mountains High or Every Little Thing, but weaker than both, especially in the melody department. It reminds me of Hands of Kindness – nothing wrong with it, but very forgettable. Nothing happens in this song for over four minutes. The most interesting thing is a cello. It does kick in with drums and bass towards the end, but too late to save it, especially as the guitars sound pretty poor and Martin starts whining. Lyrically it’s fine, if nothing special, but musically it’s boring. Weakest song on the album.

One thing Delirious are experts at is big catchy choruses, and here’s another. Great music, great lyrics, probably the best song on the album. The verses and bridges are simple, then the chorus explodes in a love song to God. This could be in the top 10 Delirious songs of all time. It’s fast and upbeat, and great to listen to – you can tell they had fun writing it, and it would be huge live. I expect it to become a classic.

A call to evangelism, this song sounds like a cross between World Service and The Mission Bell. Like God Is Smiling, it is a positive song of hope. Another big chorus with really good guitars, it sounds quite like Now Is The Time. Unfortunately it is too similar to Wonder, and not as good, so it becomes a bit forgettable due to its place on the album, straight after the best track.

This song sounds similar to the last two and suffers for the same reason as Break the Silence – it’s not as good as Wonder. It’s standard Delirious – guitar driven with a good tune – and sounds very like U2. It’s about messing things up, but God being big enough to cope. A fairly good song.

This song is looking to the future, to when God is going to come. It has really good verses with cool synth work, a bit reminiscent of Audio Lessonover. The chorus melody is like the other ballads over the years – a bit droney (though not as bad as some). But again, not enough happens, for me. It builds in the second half as drums and guitars swell, producing a really good sound, but the middle eight is not defined enough so it’s easy to miss, and this 6 minute song seems to drag to 9 or 10. To be brutally honest, the kid’s choir gets annoying!

This has a really cool guitar intro, really nice melody and keys in verse, and quality lyrics. There are decent sounds in chorus too, but the backing vocals sound like wailing. It’s a blatant worship song which finishes off the main album nicely. It’s a slow song and stretches to 7 minutes – it moves into an instrumental after 4 minutes which is cool but it doesn’t build enough, but just stays at one level. This makes it a bit long for me.

An awesome intro involving all the instruments – the sound is very good and continues into verse and chorus. The keys in the chorus are amazing – reminiscent of the genius of Matt Redman’s early work. An incredibly catchy song which just makes you smile! Another love song to God. In terms of just having a great sound, it starts as one of their very best songs. The lyrics are simple and honest, no problems there. The middle eight is not brilliant – it could have been cut, but it does lead back into the chorus well. The chorus has two halves which work well but it’s the first part which is catchy – so it would have been good to get a few repetitions of that to finish instead of the middle eight.

Another quite alternative sound, in a minor key. Very haunting music and lyrics. This is a slow song that has the melody to carry it and interesting background music, so even though it never builds, it never needs to, the song is good enough as it is. Musically it might fit on Mezzamorphis, but lyrically it fits well on this album and it’s hard to know why it wasn’t on the main CD.